Lotus F1 celebrates an amazing race in Brazil and a solid seasons performance.

The 2012 FIA Formula One™ Championship concluded in Brazil yesterday, in a thrilling battle marking the end of another electrifying and unpredictable F1™ season. As the motorsport menagerie prepares to return home, Lotus celebrates what has been a prolific journey for the team this year.

The Interlagos circuit in São Paulo was the backdrop to a gritty and nail-biting last race, which unfolded in spectacularly dramatic fashion. Despite wet weather playing havoc with race strategy, Lotus ace Kimi Räikkönen put in another gutsy performance at the Brazilian track where just 5 years previous he was crowned 2007 F1™ World Champion. McLaren driver and 2008 F1™ World Champion Lewis Hamilton went head to head with Kimi as both battled furiously contending for third position in the Drivers Championship. A rain soaked and super slippery circuit caused a collision with Force India’s Nico Hülkenberg resulting in early retirement for Hamilton in lap 55, securing Kimi the coveted spot. Lotus stable mate Romain Grosjean also succumbed to a greasy track forcing him to bow out disappointingly in lap 6. Never-the-less Romain finished a commendable 8th in the Driver’s Championship.

Both results were indicative of Lotus’ achievements during this year’s competition, where Lotus saw its 80th F1™ win following Kimi’s race to victory in Abu Dhabi, and first win with the Enstone based team. Proof the team’s plan for the Constructor’s Title is well-underway, Lotus F1™ edges closer to the top spot finishing 4th this year, up one place from 2011.
Eric Boullier, Team Principal“The conclusion of the championship is good; fourth was our target and we’ve achieved that by a considerable margin. On top of that we’ve been fighting with the leading teams right to the end of the year. For Kimi to take third in the Drivers’ Championship is a really great achievement after being away for two years and a testament not only to the car we gave him, but to the team for their support. We scored our first win with the Lotus name and achieved a good number of podiums over the year, so overall it’s been a very good season. I can only thank everyone at Enstone and everyone at Renault; I’m very proud to be a part of this effort. Our progress is very promising for next year. With the continuity and stability we have I’m sure we’ll be fighting for podiums again in 2013.”

Alan Permane, Trackside Operations Director “Looking at the season, we’re happy with P3 in the Drivers’ Championship for Kimi and P4 in the Constructors’ Championship for the team. Our target was fourth and we’ve easily achieved that, but perhaps even more encouraging is that at one stage it looked as if we could challenge for third or maybe even higher. I’m sure Kimi would have rather won the championship but it was certainly a very respectable comeback.”

Kimi Räikkönen“I didn’t really have any expectations for the year, so I think it’s been a pretty good season. We’ve had some good results and we’ve finished every race. Certainly from a race reliability perspective it’s been excellent. I just tried to do my best and to score points of course you have to finish the race. We had a good car and I didn’t get involved in too many incidents with other people. In terms of results, it could have been better, but it could have been an awful lot worse. Overall, I’m pretty happy.It was a busy race and we didn’t have the pace we wanted all the time. There was certainly a lot going on. I went off at the last corner on lap 52 as I couldn’t see well with my visor being dirty and fogged up. Where I went off you can get back on the track by going through the support race pit lane, but you have to go through a gate. I know this as I did the same thing in 2001 and the gate was open that year. Somebody closed it this time. Next year I’ll make sure it’s open again.”

Romain Grosjean“I think I started off the season very well in terms of speed, but there were too many incidents for sure. Some were due to bad luck, but others were through a bit too much aggression on my part; something we worked very hard to put right at the end of the year which has made a big difference. I’ve learned a lot over this season – probably more than I would have expected – and I’ve definitely come back as a stronger driver because of that. Overall it’s been a rollercoaster year, but a good one for sure. Hopefully there will be many better days to come.”It was one of the biggest shunts of my career so far – about 9.5g the engineers have told me – so I’m a little bit shaken for sure but otherwise not too bad. Everything was nicely under control at the start of the race then it all ended very suddenly at turn eleven. It was a strange one; I could see it was raining a bit more so I was taking it even easier than on the lap before, then suddenly the car just went from underneath me and that was it. I’ve not had much luck this weekend and that’s definitely not the way I wanted to end the season.” 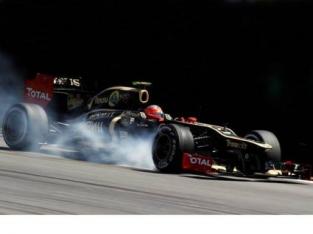